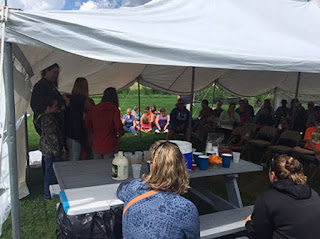 "Thank you for everything.  Thank you for being there," a Backpack Program camper expressed to Josh, one of Laraway's exployees who is leaving to pursue continued studies.

The heartfelt speech came near the end of Backpack's Talent Show, a staple of summer programming at Laraway.  The teen worked with Josh over the last few years.  His words showed the value---a positive effect---of staff  connections to the youth we serve.
The Talent Show featured card tricks and mind-reading magic tricks.  There were cart wheels, sprints and a few fancy flips.  One youth drew laughter with his "Am I (acting) Annoying?" routine.  Songs and a hastily choreographed dance number by "Sara and the Alyssas (and Tom)" rounded out the performances in the shade of a large, white tent on Laraway's campus.  Homemade maple lemonade kept performers healthy and hydrated for their on-stage antics.
It's worth noting that a card trick didn't go well...the first time.  Audience applause and encouragement found the youth---under the supportive gaze of the audience---TRY AGAIN and SUCCEED.
Expressing gratitude.  Standing in front of a crowd and performing.  Sharing your voice, humor, dance moves and, yes, your capacity to be "annoying" are all valuable lessons.  Persevering when the magic LIFE requires isn't working and trying again...this, too, is an important life lesson.
Thank you Backpack Campers and Backpack Staff for another awesome summer program!
Posted by Laraway Youth & Family Services at 10:48 AM No comments: