Laraway School teacher Carla Occaso won a summer scholarship to the prestigious Colonial Williamsburg Foundation Teacher Institute in Williamsburg, Virginia.  Carla attended along with teachers from across the United States.
The Institute offers teachers:
·         Primary source materials and standards-based content
·         A lens to view people and events that is inclusive
·         Creative teaching strategies to actively engage students in the classroom
·         A truly immersive learning opportunity, on the rich Colonial Williamsburg site
·         Opportunities to share ideas with fellow teachers and staff
·         Access to the Colonial Williamsburg Education Resource Center, offering lesson plans, media, etc.
“I’m always thinking about what they (Laraway School students) like,” Carla said.
Carla recognized that many Laraway students enjoy playing Chess, Dungeons and Dragons, and the card game, Magic.  She also knows our students benefit greatly from hands-on learning.  Carla has been creating Artifact Bags, each containing items associated with a particular member of society during the Medieval Period.  This era, also known as the Middle Ages, covers the 5th to the 15th centuries in Europe.
Students will rummage through the bags, lifting out items offering clues to who the contents might have belong too.  Are they a king, a bishop, a noble, a knight, a cleric or a commoner?  A gilded fork with a faux, plastic “jewel” might belong to a king, poised to thrust it into roasted wild boar. A rough-hewn, wooden spoon might be the sole eating implement for a commoner’s gruel.
Carla’s excitement is evident as she creates crowns, swords and shields for students to access in this highly tactile approach to teaching history.  Let the learning begin!

(Source:  https://www.history.org/history/teaching/teacherdevelopment/index.cfm)
Posted by Laraway Youth & Family Services at 11:09 AM No comments: 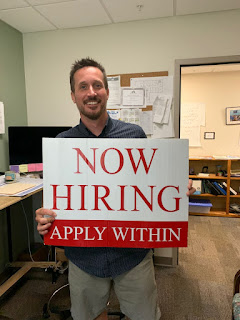 I’ve come to believe one of the most challenging and difficult questions Life asks of us is, “Will you change?” This question has been on my mind quite a bit as I prepare to leave Laraway to pursue new opportunities to provide training and consultation with other organizations in the community and beyond.
What does it take to make a big change in your life?  Reflecting on the children and youth who have passed through Laraway’s doors, has given me some answers.
I have learned it’s important to dream. Know your passions and let them run wild.  Imagine a new destination and destiny for yourself.  On the practical side of things, it’s helpful to have a plan for getting through a big change.  A long journey is less daunting when you have a map and compass to help guide you.
Finally, and I would say most importantly, you’ve got to have a travel buddy when making a change.  The tough times are a little more manageable, the good times are a little more enjoyable when you have someone to walk and talk with you.
Thank you for 20 amazing years of changes!  ~Greg Stefanski
Search Committee Update:
The Search Committee has been busy meeting with staff, reviewing survey results and posting ads for the next Executive Director of Laraway.  If you would like more details or have any suggestions, please send a message to EDSearch@Laraway.org.
Thank you- Anne, Ben, Emma and Rhonda

Posted by Laraway Youth & Family Services at 5:28 AM No comments: 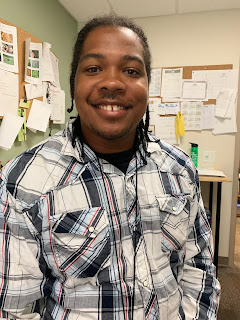 
This is about James, a math teacher at Laraway. Before that, he worked at the chocolate factory and still picks up weekend shifts from time to time. I chose to interview James because I enjoy his company. We talked about where he is from, where he has been, and where he is going.
James was born Nov. 10th, 1992 at Stanford Hospital in East Palo Alto, California. He
moved to Vermont with his family because they needed a change of pace. At the time, James was only 16. As he grew up he found out he has a knack for math. “I always liked how concrete math seems. I never liked writing.”
This led him to a career in math and a lifelong interest in games.
In order to get the credentials to use his interest in math as a profession, he needed an education. So he studied math for four years at what was Johnson State College, he also did accounting there for a year before getting a job at Union Bank. He then went to be an employee at a chocolate factory, where at some point a friend referred him to a job at Laraway. Clearly he got the job, that’s how I am able to write this. Interesting, right?
And, as for James, the future isn’t out of his grasp. “I feel like for right now, my plan is to pursue my teaching license, and get a masters in counselling.”  In the future he would like to live in the country or a suburban area because he moved around a lot as a kid. “I would like to have a wife and kids. One maybe two (kids).”
I asked him about his goals:
He said, “Skydiving. I have a crippling fear of heights. I want to tackle that fear…..What is the probability of the parachute not opening?”
To finalize this document, I can tell you that James is a great teacher. He enjoys problem solving and he makes learning fun by integrating games into math. His perseverance helps himself and others. James intends on living his best life; unknowingly he has a huge impact on others.
Posted by Laraway Youth & Family Services at 10:53 AM No comments: 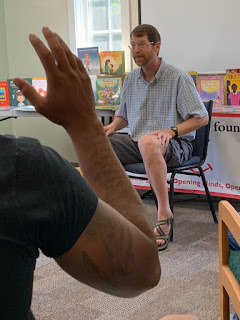 "What kinds of book do you like to read?"  Duncan McDougall asked a group of Laraway students.  McDougall, Executive Director of the Children's Literacy Foundation (CLiF), called on kids as they raised their hands responding with, "Mysteries."  "Graphic Novels."  "Adventure."  "History."  "I just like to be true," one student said.
Laraway is fortunate to have received a Summer Readers Grant from CLiF again this year. McDougall met with two groups of Laraway children, ranging in age from 7 to 19.  He offered a dramatic reading of a story before inviting each participant to choose two, brand-new books to take home.
Children and youth in Laraway's programs often come from families experiencing significant socioeconomic challenges.  Transportation to get to the library or, simply, time can be barriers for working families and others.  That's the beauty of CliF...they bring the storytellers and the books to Laraway!
We are grateful to have been selected, yet again, for CLiF's Summer Readers Program!
Posted by Laraway Youth & Family Services at 12:30 PM No comments: 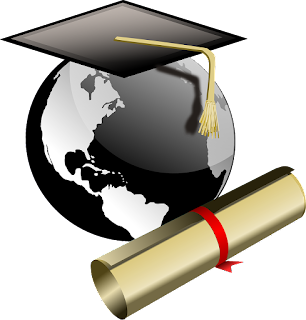 "It is not enough to be busy.  So are the ants.  The question is:  What are you busy about?"
Henry David Thoreau

Laraway School concluded another successful academic year.  Two seniors graduated, earning their high school diplomas.  Students in our K-12 school advanced to their next grade level with some  with plans to return to their public schools.
Students and staff celebrated academic and social achievements alike.  Students were recognized for meeting academic requirements in math, literary arts, science, art and the social sciences.  Teachers also recognized students for personal growth in areas of cooperation, collaboration and real-world problem-solving.  James, a math teacher pointed out that a particularly math-savvy pupil kept him "on his toes" during a unit on Budgeting!
Laraway School is a "busy" place?  What are we busy about?  Academics.  Social Skills.  Employment Skills.  Learning to "be" in the world in a positive way.
Posted by Laraway Youth & Family Services at 8:43 AM No comments: 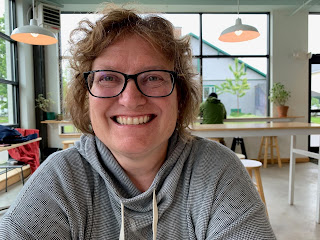 Nanci Lepsic has worked as an educator, administrator, occupational therapist and ski instructor.  She and her husband Tom also raised four children adopted from the Vermont Department for Children, Youth and Families.  The youngest, a ski racer, just graduated from Rice Memorial High School with plans to attend St. Michael’s College.
Nanci grew up in a Polish-American family in Buffalo, New York.  Her father didn’t have the opportunity to attend college, but he made sure his daughters did.  Nancy earned a degree in Occupational Therapy from SUNY-Buffalo in 1983.  She went on to earn her MBA while working as an administrator in the healthcare industry.  She taught college-level courses in New York, Pennsylvania and Vermont.
“I started my career working in a program in the Adirondacks for clients with developmental disabilities,” Nanci said.  The experience offered valuable learning experiences and chance encounters with all sorts of wildlife, including a black bear.
Nanci loves to ski.  She began teaching in an adaptive skiing program at Kissing Bridge when she was 17.   Moving on to positions at Big Tupper and Whiteface, she then realized her dream of being a Ski Bum, teaching at a United States Army Recreation Base in Germany.  An interesting historical fact is that the military’s ski lodge was a farm during the Third Reich frequented by Adolf Hitler and his entourage.
Nanci retired at 40 to have more time and energy to address the special needs of her children. One of them was a client of Backpack,---Laraway’s public school based behavioral intervention program---during middle school.  She has helped these promising young people gain a strong foothold in building positive futures for themselves.  They are now 26, 21, 20 and 18 years of age and, as of this month, all have graduated from high school and are employed.
“I was looking for what to do next when Greg (Stefanski) called,” Nanci said.
We are so glad Nanci answered the call to join our Board!


Posted by Laraway Youth & Family Services at 12:53 PM No comments: 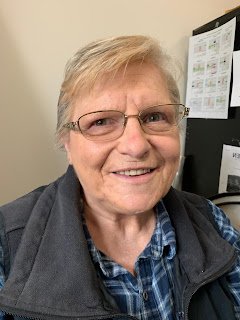 Rhonda Lehoullier is a new member of Laraway’s Board of Trustees.  Rhonda grew up in
Lamoille County.  She’s held a variety of jobs over the years and takes pride in her skills as a seamstress.  She learned to stitch and sew from her Grandmother Jo.
“I wanted to serve on Laraway’s Board of Trustees because, to me, it would mean serving the children.  It’s very important to me to be able to help,” said Rhonda.
Laraway is fortunate to have so many dedicated Board volunteers who are genuinely committed to insuring we provide the best  services available to those we serve.
Thank you, Rhonda!


Posted by Laraway Youth & Family Services at 12:51 PM No comments: